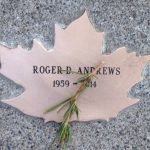 Roger Andrews requested a Leaf while he was in hospice at Nyer Urness House. This was what his counselor and friend, Beth Monkarsh, said about Roger at that time:

Roger is a funny, kind, playful, and frank person who has lived in Ballard for over 20 years.  He loves to play cards, (especially Baseball and Dummy), enjoys country music, writes poetry and short stories, and paints.  Roger is an avid Seahawks fan.  He also loves nature documentaries and animals (he has two pet fish).  He enjoys cooking, especially seafood, and is always willing to share his creations.

I first met Roger in February 2014 when I began working at Nyer and he immediately made an impression on me as a joker.  During my time at Nyer, Roger and I had regular UNO and Yahtzee matches.  Every time Roger won, we would hang up his scorecard.  Anytime I won, he would put it back in the box so no one could see my victory.  He also would wear a gold medal around his neck to let me know who the champion was.

At Nyer Roger always participated in whatever classes were offered, from art to cooking to creative writing.  A poem Roger wrote hangs in Nyer’s lobby and has touched the hearts of many staff, guests, and residents.  Roger was happy to find a home at Nyer because several of his Ballard family members live in the building as well.  For those still without housing, Roger has kept in touch and consistently invites them to his apartment to hang out and eat.

Roger is well known and well-liked by his fellow Nyer residents and it’s of little wonder.  While he may play the curmudgeon on occasion, he is generous, forgiving, loyal, funny, and kind.  I’m lucky to have met Roger and be able to consider him my friend.

We presented Roger with his Leaf and he selected the spot at Ballard Commons Park where it will be placed. (Story here.)