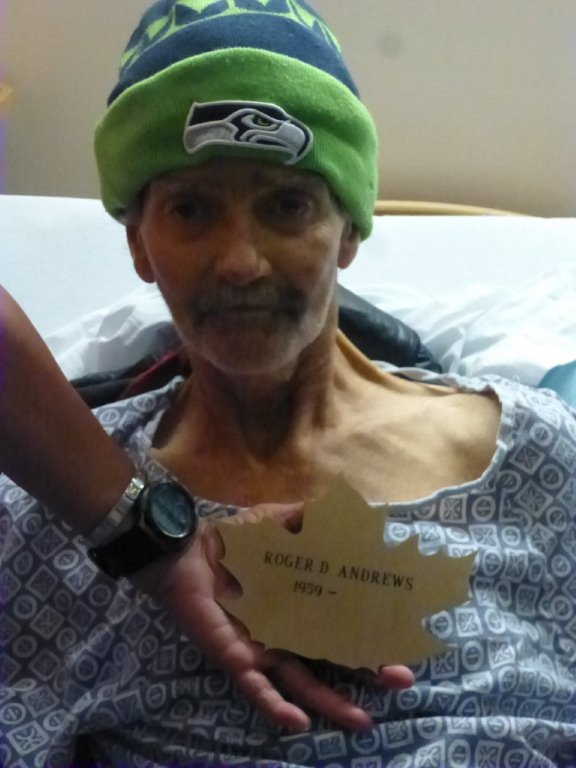 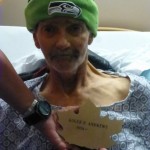 On November 19th, 2014, the Homeless Remembrance Project received a very unusual, touching, unprecedented Leaf Request, from a curmudgeonly, loveable 57-year-old Seahawks fan named Roger Andrews, who’d been homeless for a decade mostly in Ballard before moving to Nyer Urness House two years ago.  He was in hospice, with a terminal cancer diagnosis.  The prognosis wasn’t good:  perhaps six weeks, at most.

His former Case Manager, Beth, had taken Roger out in his wheelchair for a jaunt around Ballard, and they stopped to visit the Leaves of Remembrance around Ballard Commons Park. Roger remarked on how many of his friends, his “street family,” were remembered with Leaves there.  He said that he would like a Leaf of Remembrance, and that he would like to see his Leaf, hold it in his hands, and perhaps even see it installed before his death.  Beyond his street family and circle of caregivers, he has no family here, and he had been out of contact with his blood relations since he was a teenager.

Beth reached out to us to tell us this story.  In talking it over, we began thinking about how it might be possible, and even right and good, to engrave a Leaf for Roger now, with his name and year of birth, in order to fulfill his dying wish for a palpable remembrance, and to let him know with certainty that there WILL be a legacy for him here in Seattle.  In some ways, this is no different than how many families deal with marble headstones:  names and years of birth are already engraved, waiting for the end to come, and the year of death is engraved later on. 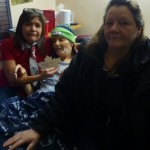 We felt that honoring Roger’s request might help him reckon with his final days, and might also be a call and a manifestation of our “ministry” of Leaves.  So, with the help of our engraver, we quickly struck a spare Leaf with Roger’s name and year of birth.  By that time, Roger was doing very poorly.  We’d hoped to go to Ballard Commons Park with him to do a blessing ceremony there, and to have him show us where he’d like his Leaf to be someday. 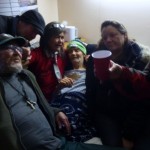 Instead , Reverend Pat Simpson led a bedside memorial at the nursing home.  Several of Roger’s friends from Nyer Urness and his street family joined us.  They came prepared to celebrate—and also to say goodbye to their beloved friend.  We held hands, we toasted Roger with red plastic cups full of beer, we blessed him and his Leaf, and told him he will never be forgotten.

On December 19th, we received this message from Beth:

“I wanted to let you know that Roger died this morning.  I’m told he had a peaceful death and I was able to go and say goodbye to him earlier today. Up until the end he was showing off his maple leaf and I truly believe that he was the most joyful I had ever seen him when speaking about it these last few days…Thanks again for helping make Roger’s wish come true.”

Roger’s Leaf was placed at Ballard Commons Park in Spring 2015.