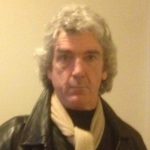 Michael was known and loved at several locations.

From Canon Britt Olson of St. Luke’s Episcopal Church:  Michael was housed at the time of his death but spent a lot of time in the Ballard neighborhood and at the Edible Hope Kitchen.  His street name was “the Professor.”  He was so very smart and knowledgeable and carried a leather briefcase.  One day  I overheard Michael lecturing another guest on the merits of the contemporary painter David Hockney. 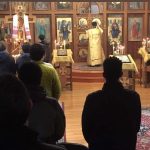 From Theresa Shepherd-Lukasik of St. Joseph Parish:   Michael came to our 2019 HS Confirmation Mass, which he has a picture of on his Facebook page. He walked down the center aisle in the middle of the homily that the bishop was giving, and sat down front and center in the middle of the aisle. Our pastor had just gotten a death threat, so when this happened we actually had security on site and our confirmation team being millennials and raised with mass shooting were all ready to jump him if something went down. But Fr. John just looked at all of us, shook his head gently and waved his hands and lipped, he is ok let him be. Michael sat there so peaceful and joyful. When the homily was done he walked up to the altar and placed some flowers at its base, then processed to the north transept of the church.

Michael died of throat cancer.  He was respected and valued.  His Leaf is at Ballard Library.  If you have memories or photos to share, please post a comment. 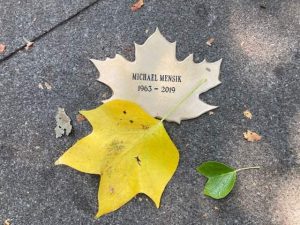