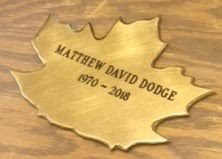 From Pat Dodge, Matthew’s mother: “Matthew was born in Lewiston ID. Shortly thereafter he moved to Port Angeles where his father was employed. His parents divorced when Matt was a toddler and he moved with his mother and sister to Bellevue.

“Matthew was fun-loving and inquisitive but somehow never able to focus or follow directions. He struggled with school from an early age. His family moved to NE Seattle when he was around 12. That was in the age of school bussing and he found himself bussed from NE Seattle to middle school in the Central District. That may have overwhelmed him as he started acting out and skipping school. No amount of counseling or alternative schooling seemed to help and he eventually dropped out completely. He started working in the food service industry and did well for awhile, paying for his own apartment and transportation. Then drugs and alcohol entered his life and it became a downward spiral. His life seemed to alternate between treatment and jail. Matthew spent his nights at shelters or sleeping in doorways. He formed friendships with other homeless people who became his support and family.

“Matthew was always loving and caring. He had a premonition that he would not live throughout the year and his main concern was that I could be prepared for his death. He said he did not want to be buried because ‘he did not want people coming to his grave and feeling sad.’ In the spring his sister and I will spread his ashes over some family property in northern Idaho where he enjoyed running and climbing trees as a child. I would like to honor him with a Leaf to acknowledge his life and passing. ”

Matthew’s Leaf is at All Pilgrims Church. If you have photos or memories of Matthew, please post a comment.