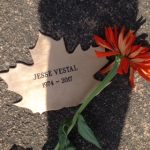 “Jesse was originally from Gold Bar, where his young children still live.  He was a gentle and generous presence on the streets of Lake City.  He was an easy conversationalist; this coupled with his honesty and trusting nature made him an easy person to love and appreciate.  We celebrated his getting into an apartment–which he often didn’t think he deserved–and grieved when he died mere weeks after getting keys to his new place.”