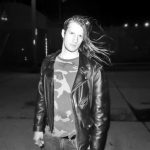 Andrew died September 1, 2020, in an encampment fire at 7th and Seneca. Women in Black held a vigil for Andrew, and one of his friends later posted this eulogy on our Facebook page:

Rest in peace, Andrew Josef Busch. 35 is too young. There doesn’t seem to be an obituary out there so I’ll do my best to honor a special person.

In mid-2007, I moved from Boise, ID to the Seattle area with a girlfriend. As young love often does, we quickly parted ways and I didn’t know where I was going to live. Luckily, I met a cool dude named Andrew that worked at Guitar Center with me. We quickly moved into an apartment and later, Morgan Lucero joined us as our third roommate.

To this day, he is the greatest guitarist I’ve ever heard. He would bring rooms to silence with his craft. After a few moments of being in a daze from processing the beauty we’d just heard, we’d inevitably ask, “What song was that, Andrew?”

His response was always the same. “I dunno, just made it up.” Often, he wouldn’t even remember how to play it again. I’ll be god damned if what we heard wasn’t on par with something Bach would have composed in his prime. That is no exaggeration. In my contacts list, I had him listed as “God” for good reason.

On weekends, we’d sneak a gallon of Carlo Rossi Sangria to a secret spot of ours underneath a foot bridge by the University of Washington. He’d bring his acoustic and I’d bring my twelve-string and we’d jam until the sun set and the buzz wore off.

I spent a year living with him. The best of my youth. After I moved to Idaho, he’d visit me from time to time and we’d spend hours chatting on the back patio of my parent’s house playing Carcassonne and sharing laughs. The highlight of every summer.

Whenever I’d visit Oregon, he’d drop whatever he was doing and drive down from Seattle to meet up so we could make some new memories. A trip to Cannon Beach sticks out in my mind.

Like millions before him, opioids altered the trajectory of his life.

Like countless gifted people before him, it robbed the world of his.

The last time I talked to him was at least five years ago, he called me from rehab in Portland. He was going to turn things around and I told him how proud I was of him. “Call me back anytime man. I love hearing how great you’re doing. Especially if you’re thinking of leaving there before you’re done.”

A few days later, he left rehab before his time there was done. I never heard from him again in any medium.

In the last few hours, I learned that a fire in a homeless encampment claimed his life on September 1, 2020 at 7th & Seneca in Seattle, WA. 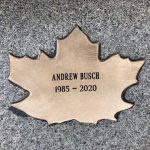 Andrew’s Leaf is on the 4th Avenue side of Seattle City Hall. If you have photos or memories of Andrew, please post a comment.