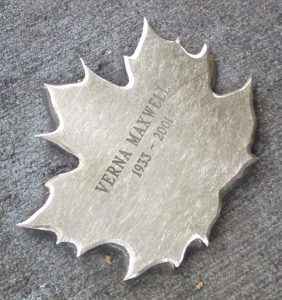 During a recent renovation, Noel House shelter lost its archives. The archives, carefully prepared by a former staffperson, are contained in a simple scrapbook of photographs and clippings dating back to the shelter’s beginning.

Its loss is unfortunate, since many of us old-timers were sure that the scrapbook contained a photograph of Verna Maxwell, and her beatific smile. Verna, who’d been an icon at Noel House since its early days, passed away October 28 after a short, intense struggle with a heart infection.

“She was a lady; I’m not much of a one,” I joked at Verna’s memorial service, “so maybe that’s why I didn’t get to know her very well.” Verna was always perfectly coiffed, dressed to the nines, with bright and glamorous red lipstick. She carefully ironed her next-day clothes every evening.

But she closely guarded her privacy, and had a way of avoiding questions. She never talked about her background, her family, where she came from or where she went. She left the shelter for extended periods several times over the years, without warning and without stories when she returned. We always imagined she had returned to her family somewhere in the South.

When she was in Seattle, Verna was quiet, and she was everywhere. “In any part of town, you’d see that woman. She had style!” said Noel House staffperson Spring Pinckney, who spoke of seeing Verna in unlikely places-Bellevue, Redmond, everywhere. Spring also spoke of Verna’s quiet dignity: “Verna was a private person. When you had to tell her what to do she’d say ‘I know,’ and then she wouldn’t. That was how she wanted to be, and you had to respect it.”

She didn’t go to the women’s day centers; she hung out at the Bon Marche. “When she stayed at the Federal Building Shelter, the least glamorous of our shelters, she was still all dressed up like Isadora Duncan,” said zimya toms-trend of the Women’s Referral Center. “She was elegant in what clothes she wore,” said a clothing room volunteer. “Even when she was wearing jeans, from the back she looked like a 17 year old.

“It shocked and bothered me that she’s dead. She’s the tenth African-American woman I know to have died of heart disease, to have succumbed to the streets,” said Noel House staffperson Ebony Colbert.

Within that shock of loss were conflicting emotions about the limitation of knowing others, despite an intense longing to know, to share, to reveal.
Lupe, whose bed was not too far from Verna’s, is one of the most persistent questioners of other women in her shelter. Because of her aggressive questioning and persistence, many women open up to Lupe.

Lupe visited Verna in the hospital. “We held hands. We prayed. She said, ‘Lupe, I am tired already.’ She started to cry.” It’s the only time any of us know Verna broke down. I remember when I worked at Noel House Verna got visibly angry just a couple of times; I can’t remember why. Despite the obstacles and duress for any woman living at a communal nighttime shelter, Verna was clothed with strength and dignity.

And perhaps that is the only thing that matters, as we build our pictures of a woman’s life without an actual photograph in front of us. Poet Constantine Cavafy goes on to say in “Hidden Things”:

“From my most unnoticed actions…. / from these alone will I be understood…. / Later, in a more perfect society / someone else made just like me / is certain to appear and act freely.”

In her closing memorial service comments, Reverend Pat Simpson said, “And so we give our sister back to God, with that smile, and that style.” From these alone will we remember Verna Maxwell. For now it is enough to carry her dignity in our memories, until we see her beatific smile again.