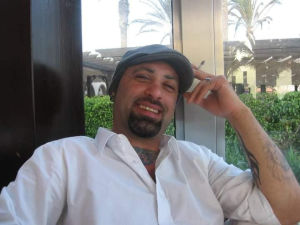 Born and raised in the suburbs of Seattle, Thom developed a love of music and tattoos.  He was an amazing artist and enjoyed drawing, playing the guitar, and singing.  Thom was a kind and nomadic soul who developed friendships easily.  His closest friends would agree that he was anything but boring.  He led an adventurous and active life.  He was always the life of the party and enjoyed running with some of the local bands until he met his one true love and became a father.  He obtained certifications in auto body repair and spent many hours repairing cars as a profession.

Thom’s distracted, frenetic energy was mesmerizing.  You couldn’t help but watch the man.  What was he going to do next?  He was disconnected to everything yet somehow knew someone everywhere he went.  And not just as an acquaintance.  He would see someone from across the way and the next thing you’d hear was Thom cursing at them, trying to throw them off until they realized it was him.  Then they’d hug like long lost brothers and start the reminiscing.  He was hilarious and an unparalleled force.  You always knew he was in the room.  Wild expressive arms, knocking everything over.  I have huge, overflowing memories of him, each jam-packed full of life.

He would find purpose in the ostensibly useless.  You think that’s garbage on the street?  Nope.  That’s something you pick up, take home and reconfigure.  I’d ask him “what is that you brought home now?”  He’d say, “I don’t even know, but it’s cool.”  It’s not lost on me that that’s how he felt about himself a lot.  He found beauty in the junk.  In the disregarded.  It was simply misunderstood.  It was a gem to him.  I thought that was the most beautiful and inspirational perception of life.

Thom didn’t make plans but somehow things would work out.  He moved with confidence and speed.  I think he literally and figuratively power-walked his way through life.  He was down for whatever.  “We’ll figure it out.”  I have so many memories of nights with friends just laughing.  Going down to the Triangle, singing karaoke with his gnarly gravelly voice, making circles with his head.  He wasn’t singing the words half the time but he didn’t care.  He just wanted to capture the sound of a twisted, tormented soul.  But he’d be smiling, laughing the whole time too.

Thom attacked life with a wanton abandon and a fast surrender, completely unrestrained.  He embraced the bizarre and outrageous.  He would string words together that made no kind of sense and had no business next to each other in a sentence.  And he’d played the bass the same way.  No rules.  He’d jump around trying to play every note at least once in each song.  No structure, just feeling.  He wanted the full experience.  And that’s Thom.

A fearless rebel who had no time for expectations or meaningless societal norms.  He was a full-on, true, independent spirit.  Absolutely bewitching soul.  A gift.  A gem.  And I am so lucky to have been your wife and a part of that brightness.

Thom and I always said the best of each of us lives in our son.  He loved him more than anything and really wanted things to be different for his sake.  It’s not fair.  When I see our son, I can see Thom.  He’s there.  As soon as he was born, you could tell they had the same gorgeous eyes, same ears, same fingers and toes.  He is just as empathetic and caring for other people.  He has the same energy, sensitivity, and stubbornness (though you probably got that from both of us).  They both love, love, love figuring out what makes things work and understanding the engineering and design behind mechanical devices.  And he just wants to do things your way sometimes.  That’s a good thing.

We love you and are so incredibly sorry that you’re gone and couldn’t do more for you, to help you.  We’ll miss you more than you could possibly know and will continue to fight for justice in your name.

You can have the last word.  This is something that you wrote to no one in particular, just part of a random rant on Facebook a couple years ago.  You weren’t in the best place but I think you summed yourself up pretty well…

“I have no more time to waste on ignorance.  This has, and always will be my life, and if you need to vicariously live through me, you have come to the wrong place.  Damaged crates of rotten food do not get cooked up and served in my restaurant.  I live freely, and live by my rules.  I love and hate equally, and have no patience for those who believe they are better.  Light is nothing without dark, and living is just the art that showcases our battles with that.  Every stagnant or exciting moment we endure or enjoy.”

He is survived by his son Cyrus, his mother and father, a step-father, his seven siblings, his grandmother, and many aunts, uncles, cousins, nieces, nephews, and found family.