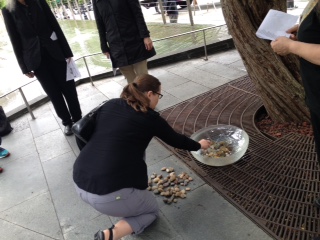 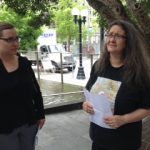 WHEEL Women in Black stand vigil whenever a homeless person dies outside or by violence in King County. Since 2000, we stood vigil for 830 people. In 2018, the King County Medical Examiner and King County Public Health did an in-depth review of five years of deaths, 2012-2017, and found 162 people who had not been recognized as homeless at the time of their death. WHEEL researched these deaths and found that 82 of them were outside or by violence. These are people we would have stood vigil for at the time of their death, had we known. We chose this special time, the Summer Solstice, to name and honor them. This day symbolizes, for us, the long hard day for homeless people, and the growing darkness we are sliding into. 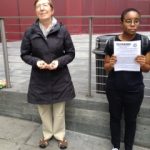 This is the longest day of the year in our hemisphere, the northern part of Earth in its orbit tilting toward the Sun. The shortest day and longest night are at the Winter Solstice in December, which we mark with a tradition of candle lighting at the Tree of Life gathering place near the Market. But it’s not only in the dark we need hope. We need it now amidst the continual suffering of people who are homeless, and the harsh, heartless public rhetoric swirling around us.

Today we will name and remember 82 homeless men and women whose deaths were inadvertently overlooked until an in-depth Homeless Death Review was published earlier this year.

To help us ponder their life and death today, we have water and stones. In four movements, we will have a short meditation, and then slowly read a group of names. For each person a stone will be put in the bowl of water, which will spill over as the stones take its place. A time of silence will follow until the next meditation.

I want to begin by teaching you a song of remembrance. (It has God in it, so if that’s not right for you, revise as you like.) During the song you can pick up a stone or two to be prepared for the naming.

Earth’s “water cycle” is driven by the sun. Ocean water evaporates in the heat and forms clouds. Snow and rainwater waters crops and fills rivers and aquifers, bringing us food and drink. The life of our water-filled bodies depends utterly on this cycle of sun and water. So on this Solstice day as we remember the dead, let us begin with gratitude for the gift of life. 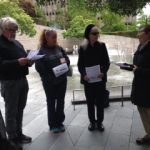 Our grief for these lives lost overflows in saltwater tears. Even more for close friends and loved ones of those we name today. We cry also for the brokenness of our community when anyone goes without a home. 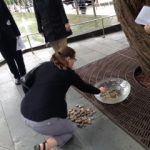 In the desert places where many of our religious traditions were formed, water is scarce and precious. Where it wells up a life-giving oasis forms, with shade, protection and refreshment. From this environment the great religions share an ethic of hospitality: strangers who walk up to your camp or settlement must be welcomed, because their lives may depend on it.

The Hebrew prophet Amos cried out “Let justice roll down like waters, and righteousness like an ever-flowing stream!” As these stones make the water spill over, so the impact of each person’s life flows out to those around them and continues when they’re gone. May our remembrance today also overflow – in a mighty determination to act for justice.

Sing: They are not forgotten… 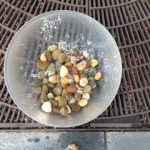 You are invited to  come dip your hand in the water as a sign of commitment to action. 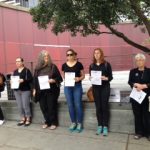 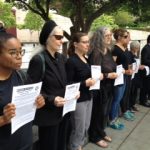 (The bowl was then emptied at the foot of the tree, Many of us then stood the rest of the hour in silent vigil.)

Details of these 82 deaths