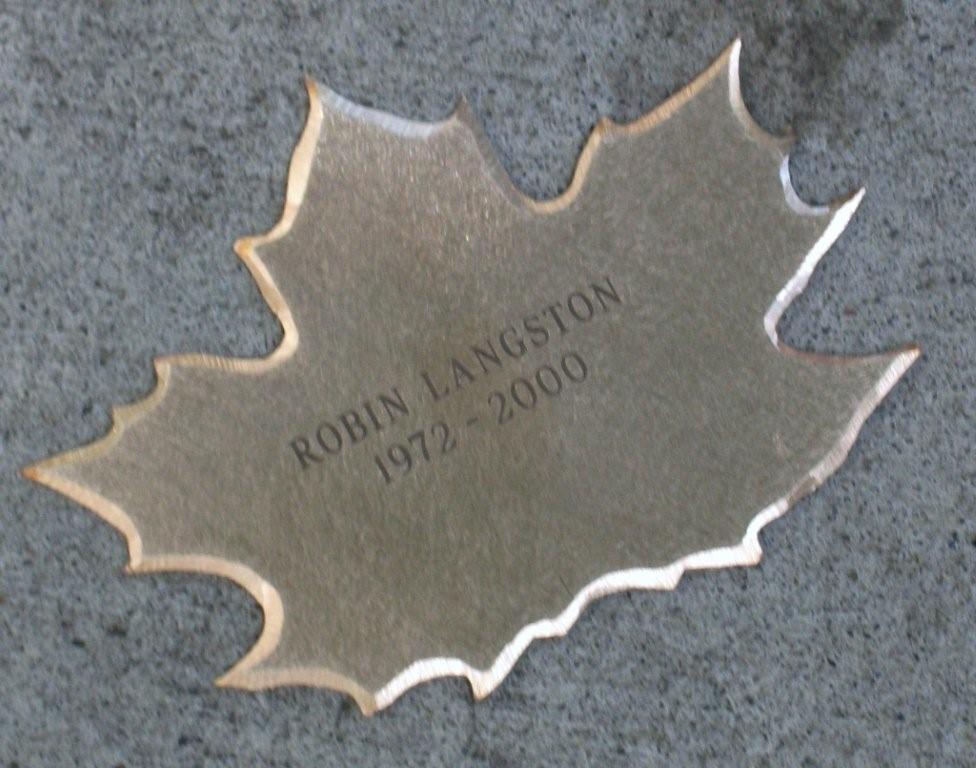 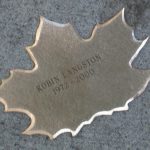 Robin Langston was strangled to death in the alley off Third Avenue and Blanchard Friday, September 15, 2000 at 4 a.m.  Late in the afternoon that day I walked down the alley, just after I’d gone to a police briefing about the murder.

Two homeless women were in the alley, one whose legs were the only visible part of her body; she was dumpster diving.  Her friend was pacing in the alley, drunk, wracked with grief, talking to herself. Is this where it happened, I asked them. Yes, Roxanne replied; homeless women who spent the night in Regrade Park had heard a woman screaming.  Roxanne said she thought she’d known the victim; nobody knew, since Robin had been found without ID and was not identified until late that night.

Soon, Renee came out of the dumpster with her treasures:  a medium plastic pot, a small fake Christmas tree, a wilted flower they both kept calling a purple daffodil.  As I stood in the alley talking, these two women slowly constructed a memorial for their fallen sister, whoever she was.  They left their makeshift memorial in that alley, and we walked on together to the Women’s Referral Center.

Robin was a beautiful 27-year-old African American woman who was beginning to get her life back on track.  Her lovingly written obituary in The Facts says Robin, who grew up in Seattle, had many friends.  “Robin was a very kind and caring person who made friends and not enemies.  She had a smile that no one will forget.”  She is survived by her parents, her two young sons, her four siblings.

At her wake, friends and family told me, “she was a good person. Nobody had anything but good to say about her.”  Her friends used to fuss with her, but they obviously loved her very much.

Robin’s family and friends were heartbroken by the media coverage of her murder.  There was absolutely nothing of her life in any of the daily papers, which called her simply “a transient with a history of prostitution.”  When the story hit the news, family members phoned reporters repeatedly to complain about the coverage and to give more information about Robin’s life.  Their calls weren’t returned.  Without the recent muggings in downtown, Robin’s murder would not have gotten even this much coverage.

At the Referral Center one night, a homeless woman shared her grief with me:  “They found her by the trash cans like she don’t matter.  I read that a guy in the apartment building [the Cornelius] said ‘We hear those people all the time,’ like she deserved what she got.”

Did the residents of that apartment building call the police right away when they heard Robin’s screams?  Police and medics responded within four minutes, but couldn’t revive Robin at the scene.

Amos, one of Robin’s friends, believes that attitude makes it easier to feel it could never happen to us.

But of course it can, it does. WHEEL, the homeless women’s organizing effort, mobilized for Women in Black last Wednesday for just that reason:  this could have been me, this was my sister, my brother.  Twenty homeless women and their supporters stood silently for an hour at the Public Safety Building Plaza to honor Robin, and all homeless people, in the wind, the cold, the rain.  At the end of that silent hour, we gathered in a circle and prayed – for our safety, for the safety of our sisters and our city.  Diane, who is homeless now, closed the prayer:  “As cold and wet and miserable as we are,” she said, “I guess we’re the lucky ones.”