“Jim Hall (known to many of his friends as “Hambone”) grew up in Prairie Village, Kansas, where he attended Shawnee Mission East High School. Jim received his Bachelor of Science in Mechanical Engineering from Southern Methodist University in Dallas, where he played Baritone in the Mustang Marching Band and was a member of Lambda Chi Alpha fraternity.

“While he was at SMU, Jim met Maggie. They dated for 16 years and then married in Estes Park, Colorado. Jim and Maggie lived in Southern California and then moved to Seattle in January 2000. They were divorced in 2006.

“Jim was an idea man, always inventing things or dreaming up new ideas. He loved to fish. He always wanted to fly. For several years when he lived in California, he and Maggie crewed with hot air balloons. When he moved to Seattle, he fell in love with flying kites, particularly on Kite Hill in Magnuson Park. Jim was compassionate, creatove, curious and complicated — a man with a big heart.”

“Jim was homeless in Seattle for several years before dying of lung cancer. He is survived by his father, two brothers and his dog, Jessie.” 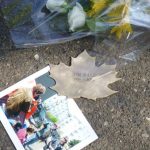 “Jim Hall was living in his pick up truck with his old yellow dog when Nickelsville began using Fire Station #39. He and his beloved pet joined us, where Jim soon became a leader, elected by the encampment to numerous terms on the Arbitration team.

“It’s no wonder he was so highly respected at Nickelsville: Jim was honest, kind, fair-minded, and intelligent. Although he was by nature a quiet person, Jim wasn’t afraid to bring up any problems at Nickelville which needed addressing.

“A car mechanic by trade, Jim had held on to his mechanic’s tools, which he used and shared generously around Nickelsville.

“Jim was a good man who was down on his luck. His contributions to the success of Nickelsville at the fire station won’t be forgotten.”