Don was of the Eskimo and Tlingit tribes, and a native of Alaska. He grew up in Juneau, Alaska and lived in Anchorage before coming to Seattle. He spent much of his life working as a longshoreman. Don’s nickname is “Don Juan Hoolio,” as mentioned by one of his close friends. Don’s friend, Byron Barnes remembered him as “caring, giving, and very intellectual. He will be dearly missed.”

Besides Don’s kindness, strong work ethic, and engaging personality, he is also remembered for his 1980s extreme mullet, as well as his cleanliness. A couple friends recalled how they learned how neat and meticulous he was after camping with him. “Before bedtime he would put cologne on his bare feet. One morning we woke up to snow all over the ground. It was cute when he broke down his tent, he was so neat at it. He would take time to clean it, fold it up just right, and get it put back in the carrier it came in.” Many friends described him as a quiet, thoughtful, kind and generous gentleman who will be missed. 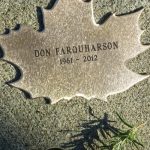 Jill Vance, who works at the Bridge Care Center (1516 NW 51st St), said that Donwas a regular and was well loved by both volunteers and his friends who also used services at the center. She said he was always nice, gentlemanly and very well put together — which is why it came as such a shock to everyone to learn that he had died.

Don’s Leaf is placed by Ballard Commons Park, beside the Leaf for his friend Byron Barnes.  If you have photos or memories of Don, please leave a comment.