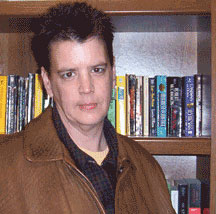 Cynthia once wrote the following Self Portrait:

Cynthia Lee Ozimek was born the daughter of an opera singer and sculptor turned steel worker on May 13, 1960. Raised in Pittsburgh, Pennsylvania, she attended college at St. Petersburg Jr. College in Tarpon Springs Florida and lived in both the state of Georgia and Arizona before moving to Seattle in the early 1990s.

Despite suffering the ramifications of homelessness in the literal sense, Cynthia has found great joy, solace and belonging in the community of women where she has resided, on and off, for the past several years. To this end, she has made it her mission, through the written and spoken word, to advocate on behalf of those individuals in Seattle homeless women’s community who, for whatever reason, have found themselves on the outskirts of the society in which they reside. Cynthia believes that each one of God’s children has, within themselves, the power to positively affect the world in any number of ways. Her biggest dream is to publish a book of essays, vignettes and stories on the women with whom she communes each day.

In addition to being a contributing writer for Real Change, Seattle newspaper for the poor and homeless, Ms. Ozimek is also a member of the Real Change Homeless Speakers bureau, a group of homeless and formerly homeless individuals who strive through public speaking to educate their community on both the facts and fallacies related to both the cause and the consequences of homelessness. While she looks forward to soon having a home of her own, Cynthia believes that home is truly where the heart is. Thus, her lack of physical shelter is not as important as one might think; Cynthia is blessed to have a multitude of “homes” in the eyes, the lives and the hearts of the women she lives with, writes and speaks about.

We
come today
contrite yet compelled,
confused yet confident
alone and in pain.
In this the process of healing,
we are the puzzles whose pieces have vanished,
we are the jesters whose antics mask pain,
we are the ghostly stampede of dying buffalo across the arid plain
mammoth and unruly,
furied and bold,
majestic and free.

We do not die easily
but bellow out in rage the names of slain ancestors
who speak from darkened dreams of more glory-full days.

We are not dead, but merely unseen.
On shadowy mountains, along desolate rivers, amidst fleeting consciousness
and the kindness of strangers these ghostlike spirits run free…

We
speak to all who listen.
In soundbites, snippets and scintillation,
we tell our stories, we spread our word, we speak for the dead.

Mayor Schell
was moved by our plight.
“We will end homelessness for women and children by Christmas,” he said.
The City was also touched by the plight of Seattle’s most distressed families, “The Nordstroms”
and gave them 23 million for a family garage.
Funny. We slept in shelters last night and we didn’t see Blake Nordstrom anywhere.

We apologize neither for our tactics nor our dreams
and we will act again and again until the Mayor, the City, the police and society
understand that shelter is a right. It is not a privilege.