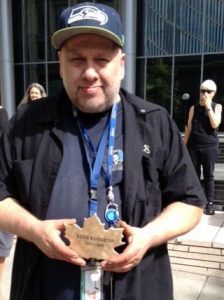 From his friend Tim Reilly:

“Colin was a long-time survivor of street and shelter living here in Seattle. There is not likely a single senior service center in town that would not recognize him. Most poignantly, he was estranged from his son Reece from age 2-33. Reece reappeared in his life about 1 year before passing on the streets of Seattle. Having Reece remembered with one of your leaves was a triumphant consolation to him. It is his picture on your site holding the leaf of Reece.

‘Though chronically poor and never educated, Colin was a diversely resourceful man who worked for many years as a painter, contractor and handyman. He was also an artistic craftsman, drawing and building pieces of art of various kinds. He was a fiercely loyal friend to many others who struggled to survive in the margins of Seattle, and his heart was broken by a number of their untimely deaths. The most painful of these was the death of his son Reece who passed away one cold night in his tent on the streets of Seattle. Despite a number of complex health challenges, his optimism could not be extinguished. He ventured out every day to visit friends or to join his community at Seattle’s Recovery Café where he was a treasured member for many years. Though cruel poverty had weathered him and shortened his life, it could not diminish his light, his gratitude or his hope for better days.”

Colin’s Leaf is at Seattle Justice Center, beside the Leaf for Reece Manderson. If you have photos or memories of Colin, please post a comment.