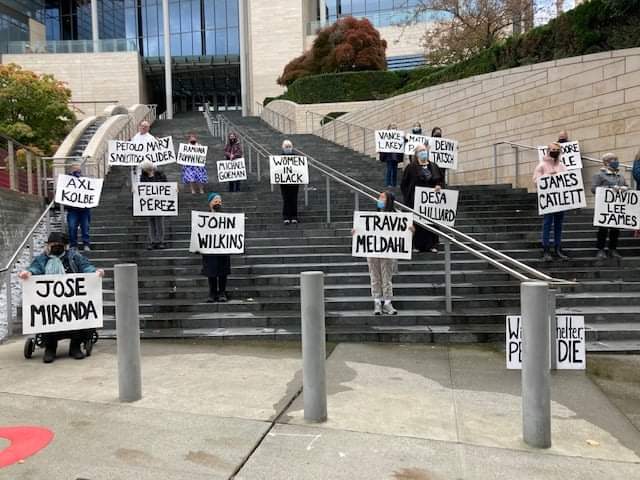 Years ago, a Homeless Remembrance Project member/architect told us the water elements outside the Seattle Justice Center, down through City Hall, and to the then-planned Public Safety Building Civic Plaza were meant to symbolize the waters of justice, perhaps after Dr. King’s “I Have a Dream” speech (and Amos:5): “No, no, we are not satisfied, and will not be satisfied until justice rolls down like water and righteousness like a mighty stream.” 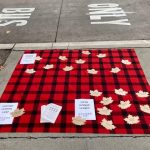 Yesterday, WHEEL, Women in Black, the Homeless Remembrance Project, and many friends, family members, faith community leaders and supporters stood vigil. We then travelled upriver through City Hall–from Fourth Avenue to our former vigil site on Fifth–blessing and laying down 21 bronze “Leaves of Remembrance” for people who experienced homelessness and died (too young!) in our City. 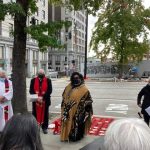 It was a profound and powerful witness, and we’re particularly grateful to Rev. Dr. Kelle Brown. Rev. Rick Reynolds, and Pastor Malcolm for their pastoral leadership. 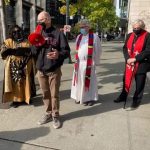 One Leaf Requester described the Leaves as a “triumphant consolation” to a person who wouldn’t otherwise have been given the opportunity of a permanent public remembrance. This is perhaps the highest compliment and best descriptor we’ve ever heard.

These Leaves, now permanently laid around our City Hall and Justice Center, say “Our city must not forget!” Those who stand vigil, who work in those buildings, and who pass by are called to remembrance, to compassion, and to action. The Leaves cry out for justice, for shelter, for housing, for safety.

No, no, we are not satisfied.