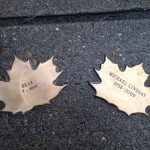 Michael Lindsay and his beloved dog Bear were killed in the same hit-and-run in 2009. After Michael’s Leaf was laid in 2011, friends of Michael requested a Leaf for Bear. Bear’s Leaf was placed at the Seattle Justice Center, beside Michael’s, on September 11, 2013, along with a Leaf for Michael’s brother, Vern Lindsay, who died that year.