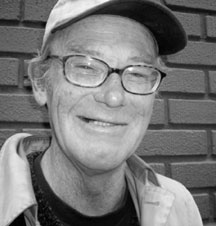 In 2008, Jonathan Raban wrote about Real Change vendor Fred Spruitenberg in a New York Times column, Down and Out in America’s Last Boomtown. “Fred Spruitenberg came here in 2001, drawn, like so many new Seattleites, by the prospect of employment. In Salinas, Calif., he read in a newspaper about the magnitude-6.8 earthquake that February and imagined a city knee-deep in fallen masonry and broken glass: “I know how to work a broom and shovel.” He bummed the Greyhound fare from a Catholic charity and took the 25-hour ride north to his new life. “Best move I ever made,” he said.”Fred sold Real Change for ten years.  On hearing of his death by pneumonia, Founding Director Tim Harris wrote, “He drank hard and looked it, but was as affable a drunk as one could hope for. His bouts of relative sobriety were frequent. Fred always had a book in his hand and seldom read crap. His wits were sharp, even when drunk… I hate that Fred is dead because his cold just kept getting worse.”