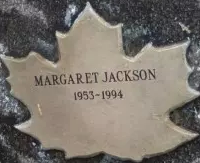 Margaret Jackson: A Woman of Will
by Margaret King
First printed in the premiere issue of Real Change, September 1994

Margaret Jackson died in March of this year after struggling with many health problems, primarily advanced lung disease. The last six weeks of her life were a grueling physical and emotional struggle for Margaret, entailing a revolving door of hospitalization and uncountable amounts of medication. Given her awesome strength of will (which all who knew her were familiar with) she fought hard to overcome what ailed her. But she told me many times in those weeks that she was exhausted from this fight, and that her body might be too embattled to keep it up. She died in her sleep in the hospital early in the morning of March 4, 1994. I remember feeling grateful that she died in the safety and relative comfort of the hospital, rather than on the street.
It’s hard to imagine someone hating the hospital more than Margaret did. She hated the confinement, the isolation, the dependence, and the ruthless boredom. She also had a difficult time accepting help from people, preferring to take care of herself. She was a fiercely independent woman, and, though that very fierceness was sometimes difficult for me to cope with, it did largely define who she was and why she was so endearing and passionate a woman.

Yes, Margaret could be fiercely combative, but also fiercely sweet. During one of her last hospitalizations she drew a picture of a rainbow on the window next to her bed which looked onto the nurses’ station. It said, “You nurses are beautiful. Thank you for taking care of me.” And it was signed, “I am Margaret Jackson and I am still bored.”

After Margaret died there was a service for her at the Church of Mary Magdalene. Over 50 people came to say good-bye to an extraordinary woman who, maybe in spite of herself, deeply touched the minds and hearts of many people.